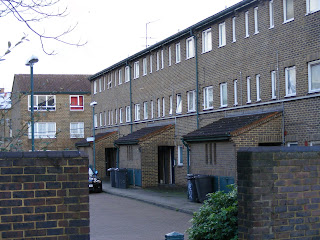 Lambeth Council have announced they will be resurfacing Juxon Street and Pratt Walk in March 2011.

The works will create a smoother surface for cyclists and motorists.

Letters will be sent to affected residents in two weeks' time - the work is expected to last a week.
Councillors have welcomed the news but are still pushing hard for resurfacing of other local streets in a poor condition - namely Stannary Street, Wincott Street, Reedworth Street, and Chester Way.
Pictured: Ingram Close, with Juxon Street behind.
at 17:29