Fancy sprucing up your street? 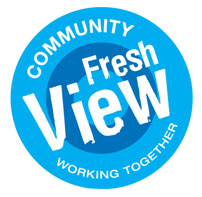 The Lambeth Community Freshview team have several vacant dates in July and August and are looking for keen residents to organise clean up days to improve their local area.

The Community Freshview team are equipped with a wide selection of tools and can provide paint, wood, compost and labour to help you spruce up your street/communal space and also help you build wooden planters and window boxes for growing on street.

If you are interested in getting involved and would like to find out more about how the scheme works then please get in touch. 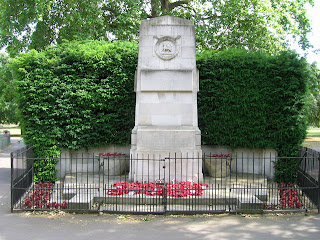 Lambeth Council has this week announced approval of £200,000 funding to refurbish five iconic war memorials in the borough.

They are Kennington Park War Memorial, the memorials in front of St Mark’s Church, Oval, and Holy Trinity Church, Clapham Common, Streatham memorial gardens, and Stockwell, which is the borough’s official memorial.
Councillor Paul McGlone, Lambeth council’s Finance cabinet member, said:
'Capital funding is very tight, but all Lambeth councillors agreed that the £200,000 funding had to be allocated to honour our responsibility to our war memorials in memory of those who have fallen'
'We also owe a debt of gratitude to local people like Naomi Klein, a Stockwell resident, who wrote a book, ‘These Were Our Sons’ to commemorate the memory of the 574 local men whose names are inscribed on Lambeth official War Memorial at Stockwell, as well groups like the Friends of Stockwell Memorial and Friends of Kennington Park for their important role in raising the profile of the need for investment.'
Last year local residents led by the Friends of Kennington Park launched a major fundraising drive which raised more than £2,500 to help clean the Kennington Park War memorial and paint the railings. Upcoming work will help to build on those improvements by seeing stonework expertly cleaned and loose joints fixed. The plans will also see the inscription of battle honours from the Second World War reinstated. Railings around the memorial will also be repaired.
At the Kennington Cenotaph, which is the memorial to the Queen’s London Regiment 24th Battalion, the structure will be underpinned and stonework cleaned. Missing lead letters will also be replaced.
The Stockwell War Memorial will again be cleaned and re-pointed. Using mason’s hand tools, craftsmen will redefine eroded lettering and architectural detailing on the memorial in the middle of busy traffic interchange. Local residents, including Sheila Dartnell and Naomi Klein, have been key champions and dedicated campaigners for the improvement work.
At the Clapham memorial scaffolding will be erected and the monument expertly cleaned using a high-pressure hot water system. Loose stonework will be re-pointed by expert builders. Over 10 square metres of existing concrete paving will be replaced by York stone.
Bronze including the cold cast bronze resin plaque at the Streatham War Memorial will be cleaned.
The works are due to be completed early next year.
The investment has come from the council’s capital investment fund.


Thames Water have made some changes to their plans for Albert Embankment in response to comments made during their second phase of consultation, which ended in February 2012.

They are now proposing the entrance to the works site will be between Tintagel House and Camelford House.

Information about these changes are available on their website.

A drop-in session will be taking place to find out what they are proposing for Albert Embankments: 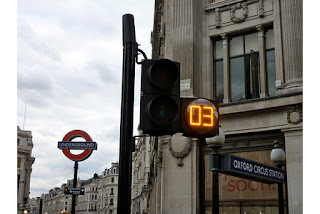 This month Transport for London are introducing 'countdown' crossings on Kennington Road - at the junctions with Windmill Row and Lambeth Road.

The crossings will reduce confusion and uncertainty for pedestrians by showing exactly how long they have to cross the road.
at 19:56 No comments: 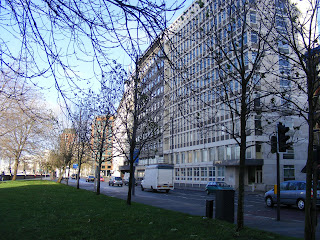 The Eastbury House Consultation will take place at the Carmelita Centre, Vauxhall Walk on the 21st and 23rd June.


Please see attached invitation for more information or you can visit http://www.eastbury-house.co.uk/index.cfm?articleID=1


To comment on the application please visit http://planning.lambeth.gov.uk/online-applications and use reference 12/01768/FUL/DC_KTH to view the planning documents.
at 19:52 No comments: 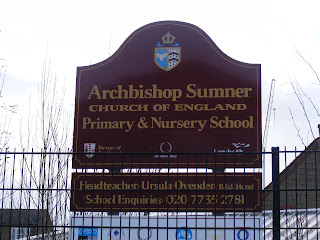 The school’s first ever summer fete, opened by Kate Hoey MP, will feature many stalls, face-painting and many other fun activities for the kids, a tombola, a fire engine courtesy of the London Fire Brigade, entertainment from the school brass band and steel pans, a mouth-watering cake sale and a barbecue. Fun for all the family!

Additions to Lambeth's list of buildings of local architectural interest 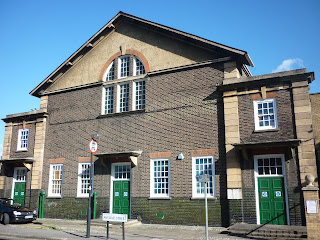 Lambeth has a rich heritage of buildings and structures which contribute to the character and interest of our streets and neighbourhoods.  Some 2,500 of these are on the government’s national list of buildings of special architectural or historic interest; the statutory list.

In addition, there are many buildings in Lambeth which are of local architectural or historic interest.  The Lambeth ‘local list’ was established in March 2010 in order to give recognition to these buildings and structures.  The objective of the local list is to identify and designate buildings and structures of local interest so that we can consider their significance when determining any planning proposals affecting them.

Whilst local listing is a planning designation it does NOT impose any additional planning controls; the normal planning regulations will apply.   When considering any planning applications the Council will seek to protect locally listed buildings from inappropriate alteration or demolition; this is set out in Policy 46 of Lambeth’s Unitary Development Plan (UDP).  Property owners do NOT need to apply for listed building consent to undertake works to a locally listed building.

The following local buildings have been added to the local list: 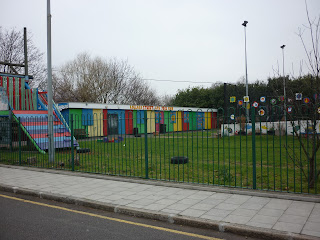 We want local communities to decide which organisations are going to take over the running of the youth and play sites from the Council.  There will be a meeting at Lollard Street Adventure Playground for organisations to present their plans to the community.  Light refreshments will be provided.


You will have a chance to score the presentations. Your scores will count for 30% of the overall score for that organisation and will help decide who will run this site.


The meeting takes place this Friday 15 June at:

Get Ahead of the Games events 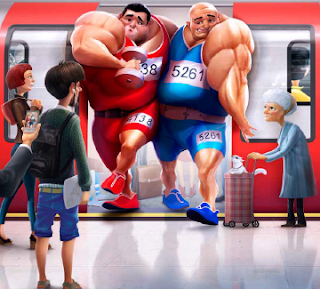 This summer London will host the Olympic and Paralympic Games – the equivalent of hosting 26 major world sports championships together in London at the same time.  Competitors, visitors, Games officials and the international media will be coming to London and the eyes of the world will be on our city.

To ensure Londoners can find out how their travel will be affected by the Games and what transport changes to expect, TfL is holding a series of Road Shows. Staff will be on hand to answer questions about the Olympic Route Network and Games Lanes, road restrictions and closures, hotspot stations and bus diversions in the local area.

In our area, the GetAheadoftheGames Road Shows will be held:

Visit the Road Shows to find out all about how the Games will affect your road, bus, train and tube travel, and how to make your journeys easier.

London will be much busier than normal during the Olympic and Paralympic Games. For more information and the times and dates of all the Road Shows across London, please visit GetAheadoftheGames.com 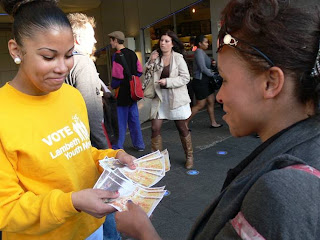 Over the last year Lambeth Council has been working with a wide range of residents, service users and partners to develop a cooperative approach to running services in the following areas: Youth centres, Adventure playgrounds, and Stay and Play One O’clock clubs

The next step is to set up a Young Lambeth cooperative that will oversee some services for children including play and youth. We want young people, parents, local residents, groups and organisations to help us do this.

If you are interested in participating then please fill out this form and the council will be in touch.

The weather could certainly have been better, but that didn't prevent people in our area enjoying the Diamond Jubilee weekend. On an occasion like this it reminds us how lucky we are to live in the centre of the world's greatest city. Here are some photos from this weekend: 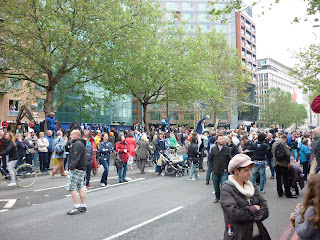 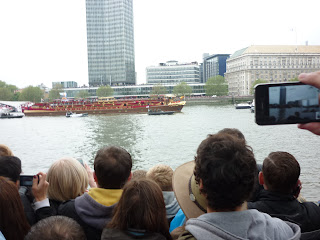 The Queen is just about visible in white! 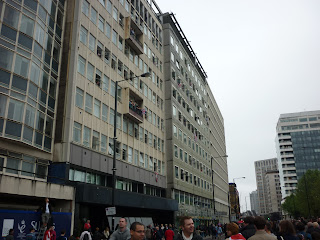 The offices and hotel windows were full of spectators. 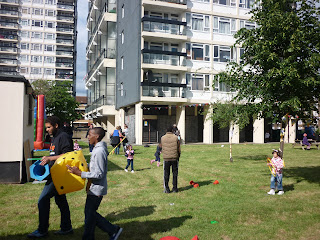 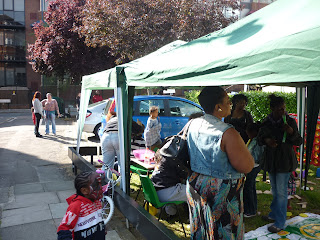 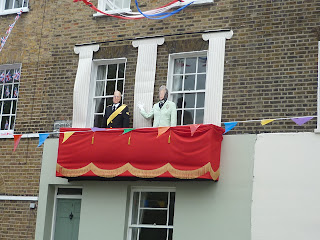 Residents of Cleaver Square did a brilliant job decorating their houses 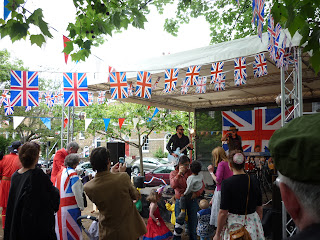