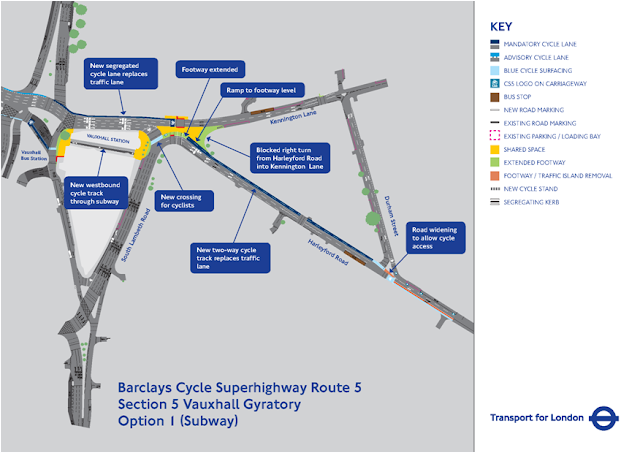 Transport for London is proposing to introduce a new cycle route between New Cross Gate and Victoria. Barclays Cycle Superhighway Route 5 (CS5) would run via Peckham, Camberwell, Kennington and Vauxhall.

About the proposed new route:
Barclays Cycle Superhighway Route 5 would bring substantial changes to the road layout to improve safety for cyclists, including:
More space for cyclists and buses, through reallocation of road space
New mandatory cycle lanes
Improvements for cyclists at 52 junctions, including new Advanced Stop Lines, cycle feeder lanes, and speed reduction measures
An innovative cycle ‘early-start’ facility at Vauxhall Bridge Road/Millbank to help cyclists get ahead of traffic
Banning some turns for cars and lorries to reduce conflict with cyclists
Extension to the existing 20mph speed limit in New Cross

The new route would also include a comprehensive package of supporting measures, including:
Over 3,000 new cycle parking spaces along the route
Cycle safety checks
Free cycle training
Industry-recognised safety training for drivers of large goods vehicles

Construction work:
TfL plan to start work in late spring 2013. They will write to local residents and businesses before undertaking work. The route is planned to open later in 2013.
at 17:13 No comments: 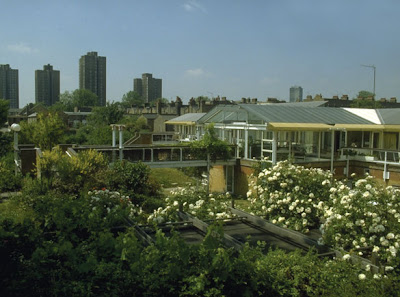 As part of the annual planned maintenance programme, work was scheduled to upgrade the water pipes at the Lambeth Community Care Centre (LCCC). However an existing leak in the pipework on the first floor of the LCCC has significantly worsened. Due to the size of the leak and the location of the pipes embedded in the concrete flooring, it is impossible to do a temporary repair and therefore necessary to urgently bring forward the repair work. Until the extensive repairs are completed, which includes excavating the concrete floors to replace all the water pipes, the building is vulnerable to sudden loss of heating and water supply. The scale of the works now requires the building to be temporarily closed for six weeks due to the amount of noise, debris and disruption the work will cause. The closure date for the building is 7 December with work commencing on 10 December.

During this time, all intermediate care inpatient admissions will be at The Pulross Centre, Brixton. The unit will operate at its full 20 bed capacity with the additional medical, nursing and therapy this level of activity requires.

Ground floor community outpatient services are being temporarily relocated during this time to other health centres nearby. These changes are being communicated directly to patients who have booked appointments during this period. The services affected are:
• Gateway Acupuncture Clinic
• Physiotherapy
• Foot Health
• Heart Failure Clinic


The temporary closure comes at a crucial time for the future of the Centre. The local NHS plan to close the intermediate care inpatient beds on the first floor and convert the Centre into a specialist centre for people recovering from amputations. At a meeting of the Friends of the LCCC last Wednesday opinion was divided as to whether the Friends should support the plans. The Committee recommended support for the plans, but the majority of members at the meeting wanted intermediate care for local people to continue.

Local business group Vauxhall One has arranged for a fantastic Christmas tree to cheer up the entrance to Vauxhall Pleasure Gardens over the festive season.

Kate Hoey MP switched the lights on at a ceremony on Wednesday evening. She was joined by Richard Tice, Chair of Vauxhall One, and councillors Jackie Meldrum and Mark Harrison.
at 13:35 No comments:

Support your local pubs this Christmas 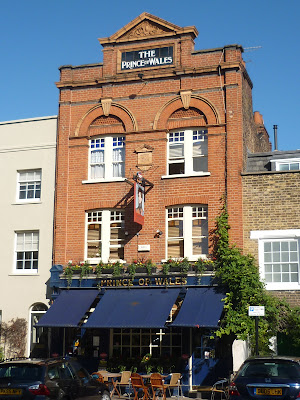 The Ship on Kennington Road emailed us asking to help support them by publicising their Christmas offering.

We thought we would help the other pubs in the ward by getting their Christmas offerings as well!

Below are details of all the pubs in the ward and links to their websites/Christmas menus.