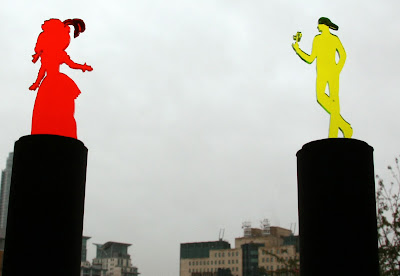 The main feature of the project for the new entrance to the Vauxhall Pleasure Gardens, built in 2010 and inaugurated in February 2011, is a pair of 18m tall columns. The original planning permission for the columns included two sculptures to be erected on top of them. 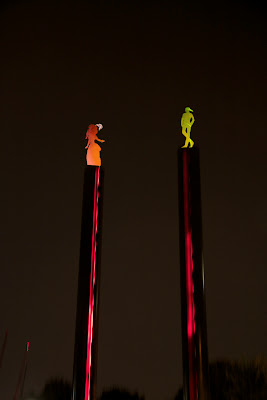 Due to lack of funds, the idea of launching a competition to create proposals for the sculptures was abandoned as the cost of running the competition alone exceeded fifteen thousand Pounds.

However, at Lambeth Council request, a new design for the artwork on top of the columns has been proposed. The two figures here submitted for public consultation are designed by Paola Piglia (an international artist who lives and works locally and is a member of FoVPG) and were originally part of the invitation to the opening of the entrance and were later incorporated into the logo for the Gardens.

They represent a 18th century lady from the historical Pleasure Gardens reaching towards a contemporary young man, who in turn is offering her a flower, thus establishing a dialogue between the Gardens' glorious past and the present.

At the moment the proposed design entails silhouettes laser-cut in fluorescent acrylic and lit at night for maximum effect. The design will be adjusted to consider safety and wind factor and the details of the proposed statues will be submitted to planning and building control for approval. Lambeth Council and Vauxhall One are looking into funding the project with money that has already been allocated for public art.

The Committee of the Friends of Vauxhall Pleasure Gardens has unanimously approved of the design. Here are their comments:

'Our committee has been formatted to represent as wide a view of the local area and our near neighbours and business representatives as possible; in this way our ideas and plans will have a built-in local community, and council approval as we progress with solutions to the park's needs and aspirations. Our logo at the moment (which has been widely praised by the local council) is being re-elaborated as sculptures on top of our 'landmark' columns. This design, executed by Paola Piglia, (on a pro bono basis) will at last see figures on top of the pillars to finalise 'The Friends'vision of 'art-in-the-park' and at a very reasonable cost to Lambeth Council and some minimal funding from private donations.'

Send your comments to steven@friendsofvauxhallpleasuregardens.org.uk or go in to the Tea House Theatre to look at the model and jot down your views in the comment box.

From the Friends of Vauxhall Pleasure Gardens
at 22:15 No comments: 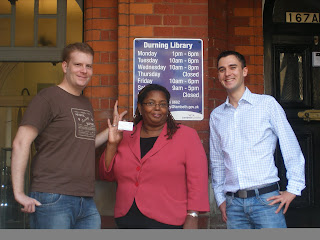 Last year your Labour councillors won a commitment from Lambeth Council that £200,000 of the profits from the sale of the Beaufoy Institute on Black Prince Road would be spent locally, with the decision made by local councillors after a consultation of local people.

Last November we consulted every home in Prince's ward, and received over 100 responses. Since then we've been working closely with council officers to draw up the priorities for the money to spent on. We've also put the money from the Beaufoy Institute together with the developer's contributions from the development at Old Lilian Baylis School.

Here's what we've decided the money should be spent on:

Durning Library
The largest number of people responding to our consultation wanted to see investment in the Durning Library, and we agreed that this crucial community resource should benefit. However, Lambeth Council has announced a massive £800,000 investment into the building at the Durning, so we wanted to see this extra money invested in a specific project which wouldn't otherwise benefit the Library. Lambeth Libraries officers, in consultation with the Friends of Durning Library, have advised on a need for improved IT equipment in order to deliver IT training and allow for privacy for users of the computers. So we have chosen to spend £26,000 on providing a further eight computers in the adult lending area, reconfiguring the space so it can be used for IT classes, purchasing new computer desks with dividers, and providing a ‘lap-top bar’ with wifi.

Traffic study to investigate the greening of Tyers Street
The Vauxhall Gardens Estate Residents and Tenants' Association (VGERTA) have been investigating the idea of greening over Tyers Street - currently a wide, empty and featureless street through the estate - and creating a linear park, linking Vauxhall Pleasure Gardens with smaller parks further north. More recently similar proposals to green Vauxhall Walk have been put forward by business group Vauxhall One. The next step needed is a proper investigation into how these changes might affect traffic and access to homes and businesses. So we are proposing to allocate £10,000 towards a transport modelling study for the closure of Tyers Street and Vauxhall Walk.

Relandscaping ‘the pit’ outside Coverley Point
Coverley Point and Haymans Point are two 1960s towers on Vauxhall Walk, which are part of the Vauxhall Gardens Estate. They are designed with large sunken concrete areas around the base of the towers. 'The pit' outside Coverley Point has suffered badly from antisocial behaviour - particularly from large groups of 'freerunners' congregating and disturbing residents. Lambeth Living and representatives of VGERTA are keen to pursue a scheme to ‘green’ the sunken area facing Vauxhall Walk, reducing antisocial behaviour and greatly improving the attractiveness of the local environment. So we have chosen to spend £40,000 on relandscaping 'the pit' to VGERTA and Lambeth Living's plans.

There was also strong support for refurbishing the playground between Mountain House and Sullivan House - Lambeth Living have confirmed that they have funds to carry out this work, so this will be taking place as well.

Councillors Lorna Campbell, Mark Harrison and Stephen Morgan said:
'We're really excited that these five fantastic projects are going to be funded, and we're proud that we've insisted on local people having a say in how money from big developments is spent. We hope this consultation will be a model for future local involvement in decisions about how money from big developments gets allocated.'
at 18:11 1 comment: