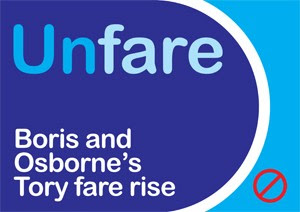 Lambeth's London Assembly Member Val Shawcross has condemned the decision by Conservative Mayor Boris Johnson and Conservative Chancellor George Osborne to inflict huge increases in bus, tube and rail fares on millions of Londoners. Since Boris Johnson was elected in 2008 the cost of a single bus ticket has risen by 44%. The combination of the rise in fares and the steep VAT rise will squeeze the standard of living in London.
Boris Johnson and George Osborne’s January fare hikes mean:
A single bus journey is up by 8% this month to £1.30 – this fare is now up 44% under Boris Johnson, from 90p when he was elected.
The Pay As You Go Oyster daily fare cap for tube travel in zones 1-2 reaches £8
A zone 1-2 monthly travelcard breaks through the £100 barrier for the first time.
A zone 1-2 annual travelcard reaches £1104, a 14% increase since 2008.
George Osborne and Boris Johnson cut funding for London’s transport system by £2.1 billion (21%) in 2010. Boris Johnson said he was ‘pleased’ with this decision and called it ‘a good settlement’ for London.
Last week Boris Johnson criticised rhetoric over bankers bonuses as worrying and said the top rate of tax could not continue forever, whilst remaining silent over steep VAT increases.
Boris Johnson’s decision to remove the western extension of the congestion zone in December 2010 cost London £50m-£70m in revenue. Londoners are paying higher fares as a result.
Val Shawcross AM said:
'At a time of great financial uncertainty and pressure on family budgets, the fare rises are completely unnecessary and add an additional burden on millions of Londoners.
'Last year Conservative Mayor Boris Johnson and Conservative Chancellor George Osborne made a cut of 21% or £2.1 billion to the London transport budget. That’s a £300 cut in transport investment for every Londoner.
'The consequences of Conservative transport cuts are clear; ordinary Londoners hit in the pocket by record fare rises in order to pay for Boris Johnson and George Osborne’s desire to cut public services. The huge hikes in tube, bus and rail fares show just how out of touch Johnson and Osborne are with the concerns of ordinary Londoners.'
at 18:45