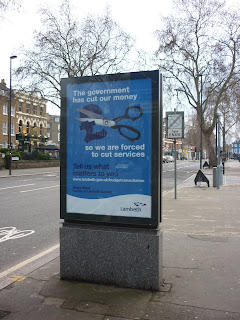 Many residents of Kennington and Vauxhall will be aware that an angry row has broken out between government ministers and Lambeth councillors.

Lambeth Council is reporting Communities Secretary Eric Pickles to a Government watchdog for fiddling the figures over the unprecedented cuts he is imposing on local services. Mr Pickles repeatedly claims that no council will face a cut of more than 8.9% this year when he knows that the majority of councils are facing reductions far higher than that figure. Lambeth's cut this year is around 12%, with more than a third of the budget being slashed over the coming three years.

Mr Pickles has attempted to divert attention from his misleading statements by criticising Lambeth for spending £600 on a poster campaign highlighting how residents put forward their views on what services should be prioritised by councillors. You can take part in the consultation here , and use Lambeth's budget simulator to indicate how you would make the difficult choices that councillors face.

Labour councillors have worked hard on the intial budget proposals to ensure that wherever possible savings will be found from cutting back office costs and management. However, tough decisions are inevitable.

Lambeth Council's final 2011/12 budget will be approved at a Full Council meeting on 23 February.