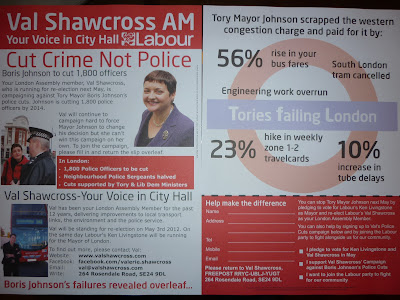 Over the next couple of weeks Labour volunteers across Prince's ward will be delivering a leaflet which launches Val Shawcross' campaign to be reelected as London Assembly Member for Lambeth and Southwark.

Val has worked hard for this area ever since being first elected to City Hall in 2000. You can read about what Val has been up to on her website, which includes her annual report.

Val is highlighting Boris Johnson's terrible record as Mayor of London, including his plans to cut 1800 police officers, and his decision to raise bus fares by 56%.

If you could spare some time to deliver a few leaflets to your street or block, please get in touch.
at 22:51