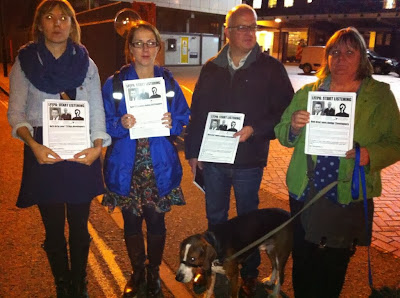 Local residents have once again secured a major victory against the London Fire Authority’s handling of the plans to develop the site behind 8 Albert Embankment.

Residents of Whitgift House and Whitgift Street, supported by your local Labour Team, have consistently called for the Fire Authority to drop its unsatisfactory developer, Native Land. We are pleased to report that this hard work has paid off, and that members of the London Fire and Emergency Planning Authority yesterday voted to discontinue using Native Land.

Joining local campaigners Visakha Chandrasekera and Michael Ball at the London Fire Authority HQ this afternoon; Councillor Steve Morgan and Labour candidates Joanne Simpson and David Amos spoke out on residents’ behalf and publicly called for the abandonment of Native Land. Steve and Joanne also both met high level management of the Fire Authority last week to warn the body that they intended to publicly denounce the use of Native Land. Steve and Joanne highlighted three main issues: lack of public transparency, woeful levels of affordable housing and a contemptuous lack of regard for the opinions of local residents.

Your Labour Team is delighted that the Fire Authority has finally decided to listen to the concerns of the community and has realised that an alternative developer would produce a better deal, not only for local residents, but for the financial future of the Fire Authority too. This is a fantastic result and thoroughly deserved of the hard work and dedication of the local campaign.

You can be assured that your three Labour candidates David Amos, Chris Marsh and Joanne Simpson will continue to monitor this issue closely and ensure that the Fire Authority proceeds in its new choice of a developer in a transparent way. Your local Labour team will continue to support residents to ensure we secure the best benefits for the community.

Pictured: local campaigners at an earlier protest against Native Land outside the Fire Station
at 18:46