Updates at the Friends of Vauxhall Spring Gardens AGM 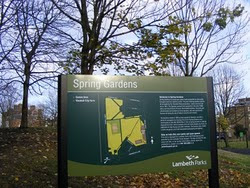 This evening saw a well attended AGM of the Friends of Vauxhall Spring Gardens.

The people behind the 'Cabinet Gallery' proposal announced they will be holding a consultation event ahead of applying for planning permission. It will be held next Wednesday, 25 May, from 3pm to 7:30pm, at Vauxhall City Farm. They hope to build a prestigious gallery in a new pavilion building on the olf 'Lord Clyde' site in the north eastern corner of the park. Associated environmental work will include greening over the hammerhead road off Tyers Street, thereby increasing the amount of green space in the park.

The work to the Kennington Lane entrance is progressing, and a completion date of 10 June has been set. Six new elm trees and two new mulberry trees have been planted and the columns are up. The granite paving will be installed from next week, and the entrance walls should be ready shortly after that. The final thing to complete will be the lighting behind the walls and up the columns.

Once the entrance is complete a grand opening ceremony will be arranged, when the park will be formally renamed 'Vauxhall Pleasure Gardens', the name used in its eighteenth century heyday.

Finally there was news about the proposed statue of Basaveshwara, the inspiration for Indian democracy and equality. A site in Albert Embankment Gardens has been identified and designs for the statue and associated environmental works are at an early stage.

The Friends normally meet every first Monday of the month, at 6pm, at Vauxhall City Farm.
at 21:34