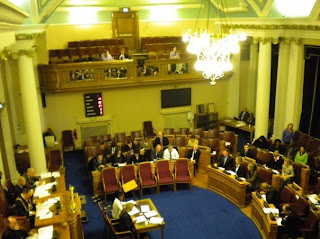 Last night Lambeth's Full Council approved the Labour budget for 2010/11, after a debate in which the Lib Dems and Tories appeared to have given up.

The headlines for the budget are:
-A Council Tax freeze for a second year
-£30M of waste cut out
-Healthy reserves for lean times ahead
-Investment in new and expanded services, including lunch clubs for older people, youth services, better noise nuisance services, and anti-crime measures
The Lib Dems' 'alternative budget' was roundly criticised for being irresponsible and completely incoherent.
In the debate Prince's ward Councillor Mark Harrison said:
'Labour's budget continues the previous three years' positive investment, which has benefitted Prince's ward massively. Our expanded Safer Neighbouhoods Team is working well and involving residents in the policing of the area. The Better Neighbourhoods Programme has resulted in resurfaced pavements and roads, and new trees across the Ethelred Estate. Labour's huge investment in our schools has seen Lilian Baylis increase its GCSE pass rate by 15% in just one year. The increased spend of the Housing Capital budget has seen major works to improve more than 1000 homes on the Vauxhall Gardens, Ethelred Towers and Whitgift Estates.

'Even in my position as the Council's newest member, I'm fully aware of the historic nature of this budget. this is the first time in recent decades that an adminstration has managed to freeze council tax whilst preserving and expanding services and reserves.

'Compare this to the Lib Dem plans - cutting the vital 'Invest to Save' programme to pay for an unaffordable council tax cut and a 1/2 million pound fund purely for Councillor Bradley to dangle at Vassall's voters - plumbing new depths of Lib Dem fiscal irresponsibility. This Labour budget reaffirms my pride in standing for election as a Labour councillor in Lambeth.'
at 13:17