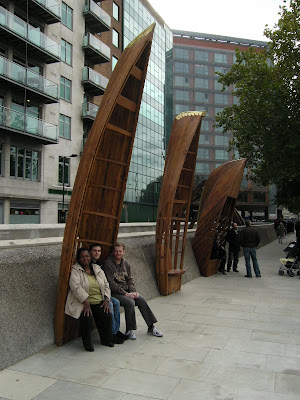 Today was a busy day for Labour councillors in Prince's ward.

We started with a campaigning session on the Vauxhall Gardens Estate, visiting people in Edward House, Newburn House, and Dunmow House. Issues raised included the need for improved cleaning and refurbished kitchens.
At lunchtime we visited the White Hart Dock, on the Albert Embankment, for the opening of a new public art installation. There has been a dock on site for over 600 years, but it has sat virtually unnoticed behind high walls for decades. The art project uses a boat theme to draw attention to the dock, with large hull-shaped arches over the dock, boat sculptures with benches along the side, and boats floating within the dock itself. The opening ceremony is the culmination of several years of work from Lambeth Council and the artists who created it. It was funded by developers of new buildings along the riverside through 'Section 106' planning gain. 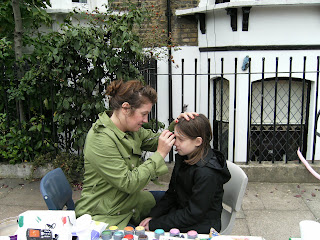 Finally we walked over to the Prince's East Residents' Association's street party in Oakden Street. The Association represents residents living in streets in the east of the ward - including Wincott Street, Reedworth Street, Oakden Street and Monkton Street. The Association have been working closely with the Olive School, which is a relatively new occupant of the school on Oakden Street and caters for children who have been unable to win a place in mainstream secondary schools in Lambeth. The street party was a big success - with a barbecue, stalls, and face-painting.

Pictured:
1) Lorna, Mark and Steve try out the bench at White Hart Dock
2) Face-painting at the Prince's East street party
at 19:04