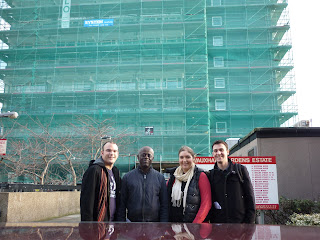 Labour has secured over £100 million to improve sub-standard homes in Lambeth. Labour councillors have spent months lobbying Government ministers for funding to complete upgrade works on 15,000 homes that need new windows, doors, kitchens, bathrooms and central heating to bring them up to minimum standards.
Labour’s Lib Peck, Cabinet Member for Housing, and Council Leader Steve Reed both wrote to Government ministers repeatedly to press the case for Lambeth’s tenants. The money will come through over the next four years, although there is disappointment the Government is delaying half the funding until 2014, and the total sum available is less than half the amount needed to complete work on all substandard homes.
Cllr Lib Peck said: "I am pleased our hard work has delivered some good news for Lambeth’s tenants. It’s not right people should be left to live in sub-standard homes. This money is a real boost but it is less than half the amount the Labour Government promised so we still have a significant challenge ahead of us."
Cllr Steve Reed commented: "It’s disappointing the Government is delaying this funding while bringing forward their cuts, but we welcome this news. Labour councillors and Lambeth’s tenants made such a strong case together that even this Government found it hard to ignore us completely."
Pictured: the money means Lambeth will be able to carry out more window replacements programmes, like the one at Haymans Point, as well as works to upgrade tenants' kitchens and bathrooms.
at 15:54