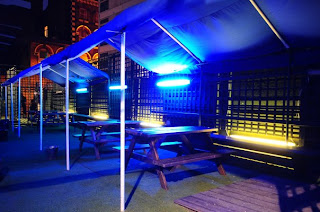 Applicants Name: SE11 Limited
Premises Address: Hidden - Arches 100 To 102 Tinworth Street London SE1 5EQ
Variation requested:
To vary the layout of the premises as follows; in accordance with the drawings attached to the application drawing No. 1003/01.

The addition of a new internal bar in the dance area

The addition of a small external bar area on the raised timber decking area to the font of the premises.

Representations will be disregarded if they are deemed to be vexatious, frivolous, or irrelevant, or if they are received later than the 21st September 2010.

Applications for new Premises licences, and variations and reviews of existing ones, will be placed on the Councils website for inspection; the address at which these may be accessed is www.lambeth.gov.uk/Services/Business/LicencesStreetTrading/AlcoholEntertainmentLateNightRefreshment/CurrentApplications.htm

Ward councillors can make representations in writing and/or at a hearing on behalf of a resident or local business if specifically requested to do so. Additionally, ward councillors are now able to make representations in their own right if they have concerns about any premises, regardless of whether they live or run a business in the vicinity of those premises. Councillors may also apply for a review of an existing licence if problems at that specific premises which justify intervention are brought to their attention.

If you require any further information on this application, or guidance on the process of making a representation, please contact licensing@lambeth.gov.uk
at 16:44